MCTC is built on the principles of quality, efficiency and innovation. We provide our investigators and industry sponsors with support for clinical research ranging from trials of novel therapeutic agents to large public health prevention trials. MCTC has a dedicated drug study area for early phase clinical trials, and a large family friendly observational research and outpatient clinic space for low acuity studies. We also have staff to support each stage of a trial from concept, to protocol design through to trial conduct and analysis. As a leader in paediatric trial design and conduct, MCTC invests in innovative trial designs and innovative use of new technologies.  Our collaboration with the Clinical Epidemiology and Biostatistics Unit (CEBU), and with leading health economists at the University of Melbourne, supports these initiatives.

The MCTC enables researchers to bring new and novel therapies to children earlier, and generates knowledge to improve healthcare for all children.

On Thursday the 6th August 2015 the Melbourne Children’s Trials Centre (MCTC) was officially opened at an event held at the Larwill Hotel. Over champagne and canapés, researchers and clinicians mixed with representatives from our partners in industry and government.  MCTC was formally deemed ‘open for business’ by Mr Bill Ferris AO, Co-Chairman of CHAMP’s Board of Directors and Investment Committee. Mr Ferris was perfectly positioned to open the centre and deliver the key note address. Mr Ferris is a 45-year veteran of private equity in Australasia, having founded Australia’s first venture capital firm in 1970. He was made Companion of the Order of Australia for his philanthropic activities, as a leader in support of medical research and his role in the establishment of the private equity sector in Australia.  He was Chairman of the Garvan Institute of Medical Research from 2001 to 2013, Chairman of the Health and Hospitals Advisory Fund and a member of the panel of the McKeon Review – Strategic Review of Health and Medical Research. Mr Ferris spoke of the importance of Clinical Trials for the economy of Victoria and Australia, we well as for the health of our population. He called for more investment in the development of Australian discoveries and the promotion of Australia as a place to conduct Clinical Trials.

Prof Kathryn North spoke on behalf of the Melbourne Children’s partners and how MCTC supports our researchers and acts as a centre of excellence for industry trials. Kathryn congratulated Prof Andrew Davidson for the accomplishments of MCTC under his leadership.  Importantly Kathryn thanked the Royal Children’s Hospital Foundation for the funding that enabled the creation of the centre. Sue Hunt, CEO of the foundation was in attendance.

Prof Andrew Davidson, Medical Director of the MCTC detailed some of the success to date which include the hire of key research and support staff, significantly a Business and Operations Manager to oversee the refurbishment of key research space, and the day-to-day running of the MCTC. A major achievement of the MCTC was the centralising of financial and contract management and the building and customisation of a Clinical Trials Management System to better support and facilitate trials on campus. Andrew also laid out the plans for the future of the MCTC, including further integration of research into the culture of the hospital, better cooperation and coordination with other paediatric trials centres around Australia and finally, working with government to increase Australia’s reach internally with industry sponsors. 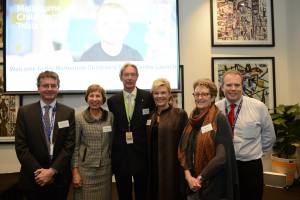 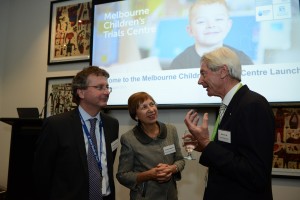 To engage with the MCTC please send an email to mctc@mcri.edu.au

To find the details of a particular staff member, please visit the contact us page